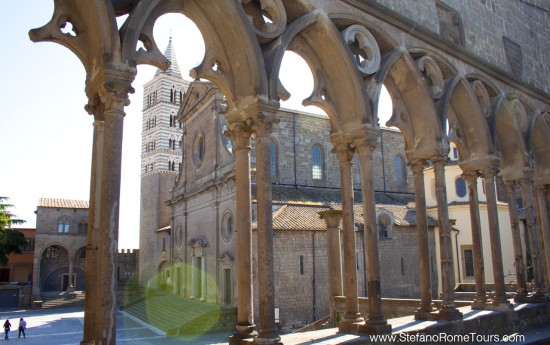 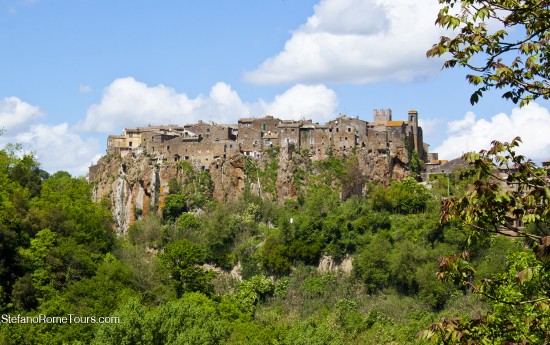 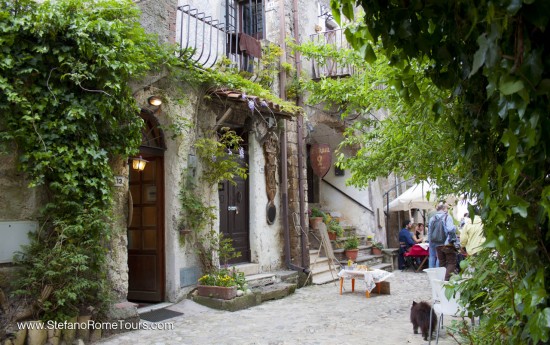 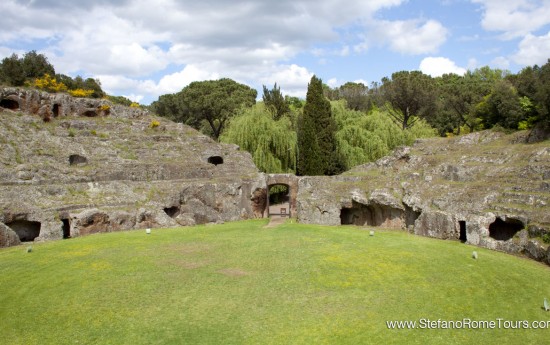 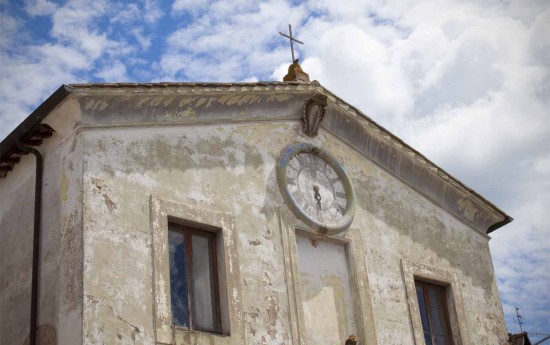 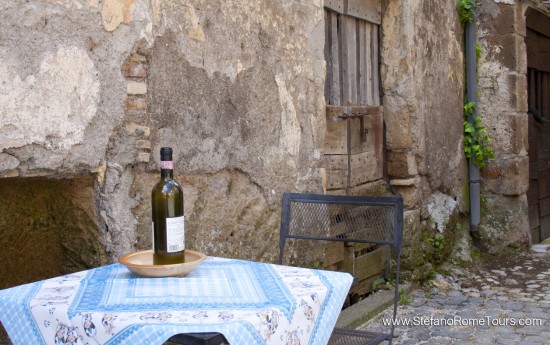 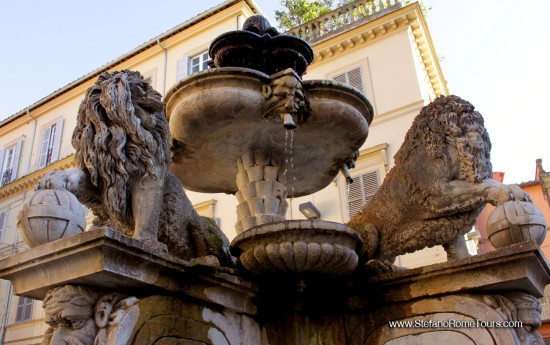 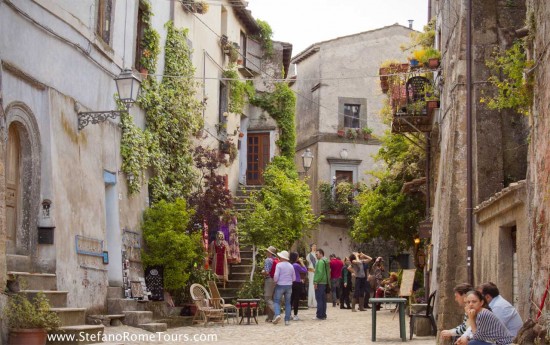 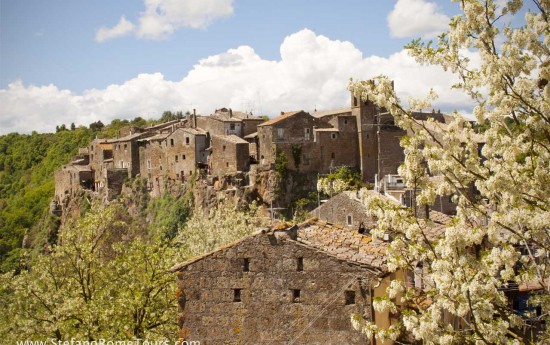 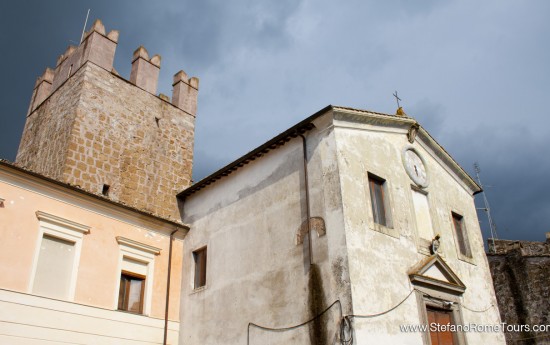 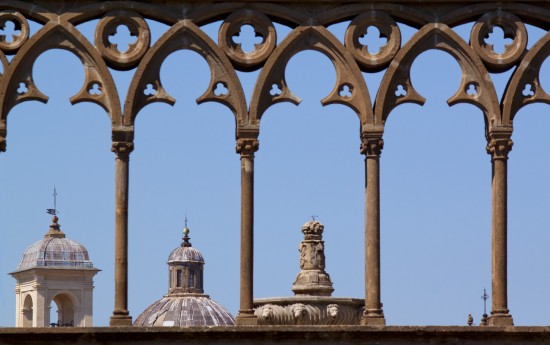 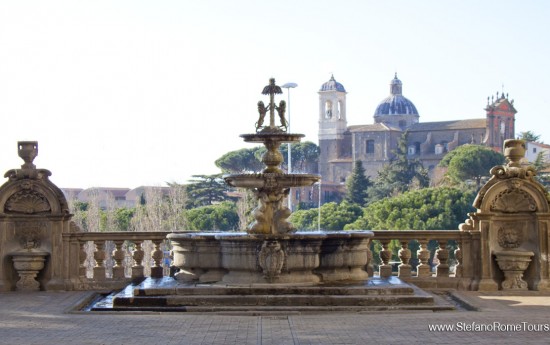 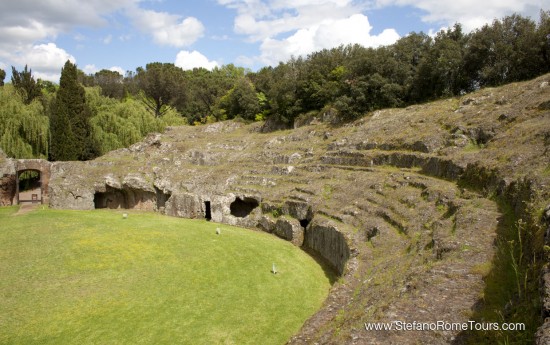 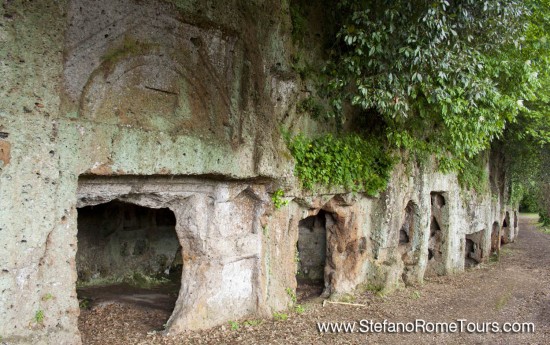 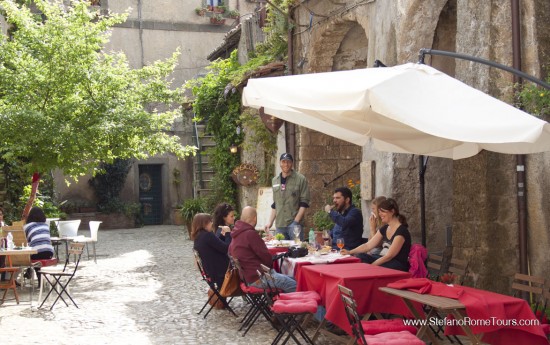 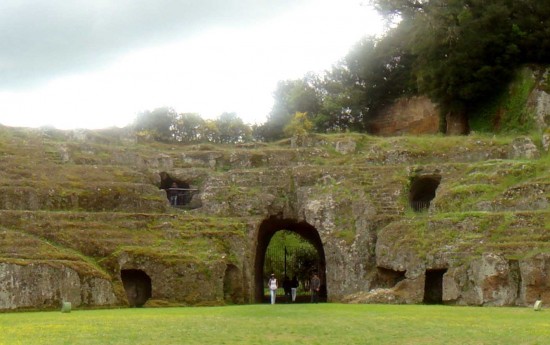 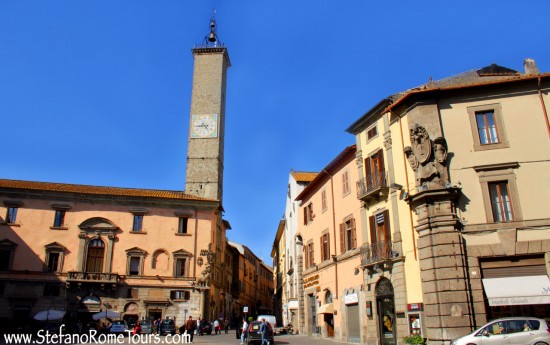 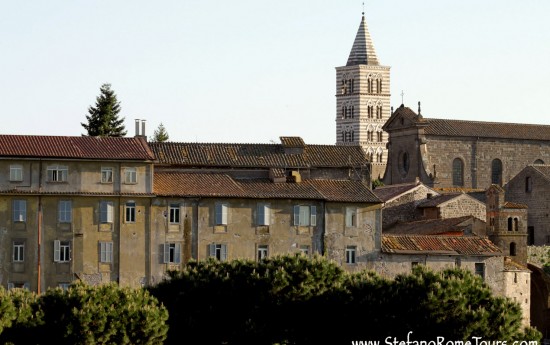 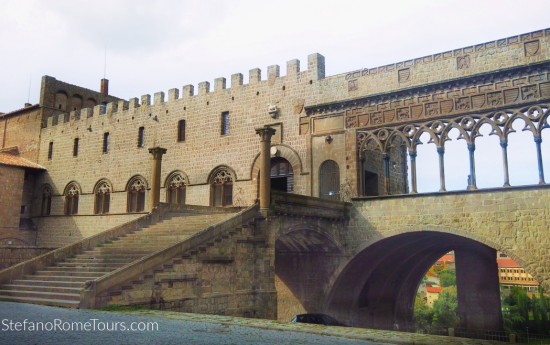 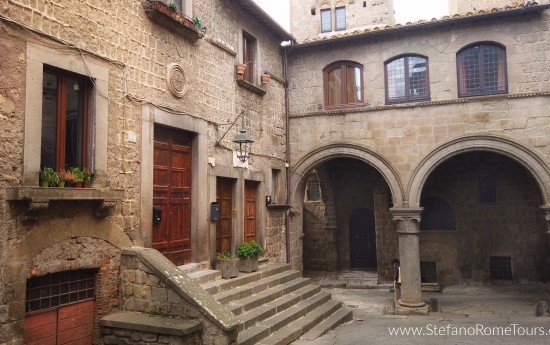 Enjoy a visual journey to Viterbo, Calcata and Sutri on our Tour Video:

Journey with us to the beautiful Italian countryside, where dreams are created and friends are made! Amidst olive groves, lush vineyards, and gentle landscapes, you will experience Italy at its very best.

This tour takes you to the enchanting cities of Viterbo, Calcata and Sutri.

When we first come upon Calcata, one of the best preserved medieval hill towns in Italy, you will be amazed at this quaint village perched high atop a mound of volcanic rock.

You will see the small castle, reminding you of a chess piece and you’ll notice the beautiful, dense forest that surrounds the village.

This fortified medieval village appears exactly the way that travelers expect a hill town to look.

There are scores of art galleries tucked in the cobblestone alleyways and it’s hard to believe that the government condemned the village in the 1930’s, fearing that the cliffs on which it sat could be crumbling.

Thirty to forty years later, artists were drawn to the village due to the supposed mythical properties of the volcanic rock that the village sits upon.

Almost all of the inhabitants in Calcata are transplants from elsewhere in Italy and other countries. This gives the village an eclectic and diverse atmosphere that is quite interesting. 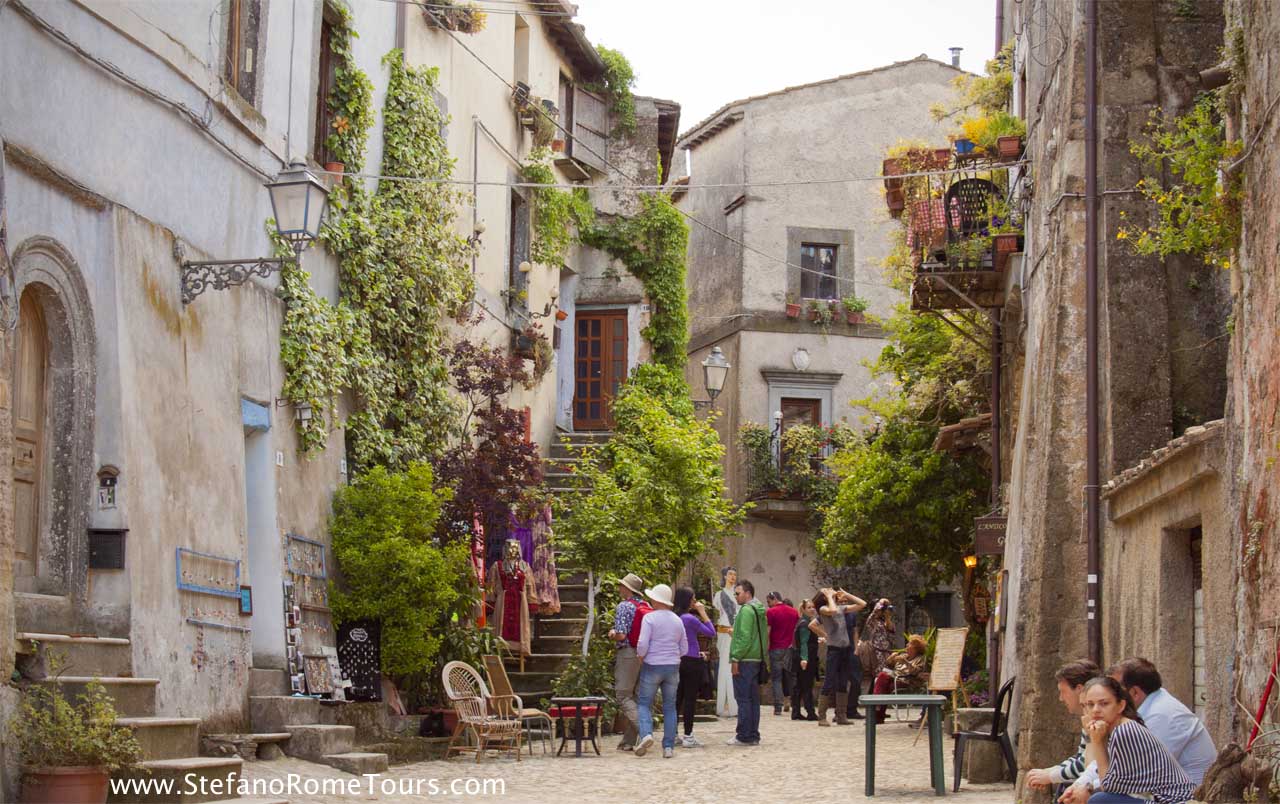 Prominent in Calcata is the Church of Santissimo Nome di Gesù (The Church of the Blessed Name of Jesus).

This church dates back to the 14th century but was restored in 1793 by the will of the family of Sinibaldi. The church consists of a single nave and the roof truss.

They are preserved and there is a baptismal font un'acquasantiera (basin of Holy water) from the sixteenth century and a tabernacle wall. Behind the altar is a series of beautiful, historic paintings representing stories of Christ.

After our visit to Calcata, our next destination will be Sutri. It is perhaps the most beautiful and relatively undiscovered Etruscan archeological site in Italy; a lovely little town just an hour from the Eternal City.

Sutri is a town of very ancient origins and boasts ruined and surviving monuments from Etruscan times down through the Middle Ages.

Here we will see the remains of the ancient city walls, built of rectangular blocks of tuff.

Tuff (from the Italian "tufo") is a type of rock that consists of consolidated volcanic ash that was spewed forth from vents during a volcanic eruption. Tuff is sometimes called tufa, although tufa also refers to a quite different rock.

The modern commune of Sutri has a few more than 5,000 inhabitants. Its ancient remains are a major draw for tourism including a Roman amphitheatre excavated in tuff rock, an Etruscan necropolis with dozens of rock-cut tombs, a Mithraeum incorporated in the crypt of its church of the Madonna del Parto, and a Romanesque Duomo.

As amphitheaters go, it is fairly small, only about 50 X 40 yards. It faces the town, and visitors often experience an enchanting and almost mythical atmosphere.

The exact date that it was built is not known, but scholars believe that it was constructed from as early as the Etruscan archaic period to the beginning decades of Christianity.

Although many amphitheatres are round, this one has a shape that is a bit more oval . The entrance facing the north, toward the Via Cassia, is badly deteriorated. It leads to the arena floor.

There is a tunnel that has five entrances still visible on each side and circles the area at its outer circumference. Due to this configuration, it creates and area separate from the spectators' section, the cavea, which was divided into three orders of tiers.

A rectangular niche is cut into the lowest section on the northwest side and had its own private entrance which was believed to be used for the more important figures of the time period. This would have been the Ancient Roman version of a VIP box seat!

Your Viterbo, Calcata and Sutri tour continues to our last stop, the picturesque city of Viterbo.

Viterbo is a charming ancient city situated between the two magnificent lakes, Bolsena and Vico. After our travels, you are likely ready to sample some of the delicious fare for which Italy is famous.

Viterbo was nicknamed the "City of the Popes" since, like Rome and Avignon, Viterbo was the Papal Seat between 1257-1281.

Enjoy free time for a  delicious lunch at a local restaurant of your preference in Viterbo, and ample time to self explore Medieval era places of enthralling Viterbo.

The historical events which have characterized the province of Viterbo have left many fascinating things for travelers to see and experience including churches, palaces, castles, ruins, etc. The historical centre of the town – surrounded by its medieval towered town walls of the 11th –13th century, contains a remarkable architectural legacy.

We will first visit the central square of the Piazza del Plebiscito where lions and palm trees across the square are Viterbo's symbol, before making our way to the Papal Palace.

Also called Rocca del Papa, it sustained a great deal of damage by the bombings in 1944 and has since been renovated.

This grand building was erected by Cardinal Albornoz, who died in Viterbo in 1367, but at the time of his death, it had not been completed. It actually had been partially demolished by the population of Viterbo and it was only in 1457 that the work started again to be concluded in 1462 under Pope Pius II.

Later, both Popes Alexander VI and Julius II enlarged and embellished the building. The external loggia was created by Pope Paul III Farnese in 1538. A fountain with the arms of the Della Rovere stands in the internal atrium.

From there is a staircase with a porch towards the atrium at the first landing. The stairs lead to the first floor where you find the Throne Hall. 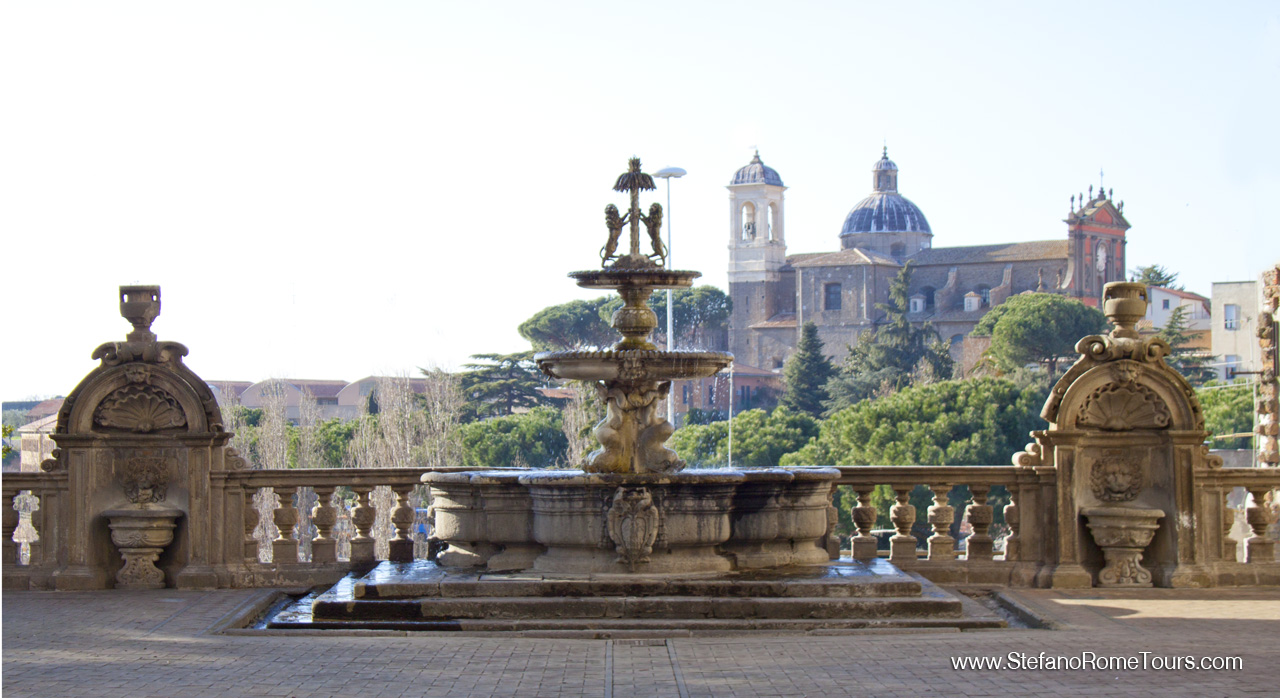 Pope John XXI had a new wing added to his palace at Viterbo and unfortunately, it was poorly built. While he lay sleeping, part of the roof fell in and he was seriously injured. John XXI died eight days later, probably the only pope to end his life by an actual accident, on May 20, 1277. He was buried in the Duomo di Viterbo (also called the Cathedral of S. Lorenzo) which we will visit and where his tomb can still be seen.

The building also has a striking Gothic campanile (bell tower) in black and white stone. At the right of the loggia begins the proper Episcopal Palace with the Throne Hall (Sala Gualtiero), the Gallery, the Library Hall, the Hall of Arms and the Apartment of the Cardinal.

Meriting a visit is the most important monument of the city, the Cathedral of S. Lorenzo.

It is Romanesque in style and was built by Lombard architects over a pagan temple of Hercules. It was rebuilt further from the sixteenth century on, and in 1944 it was heavily damaged by Allied bombs.
The impressive Gothic belfry is from the first half of the fourteenth century, and is influenced by Senese artists. Inside the church is the sarcophagus of Pope John XXI and the picture Christ Blessing by Gerolamo da Cremona (1472).

The most ancient building in the city, the cathedral, dedicated to St. Lawrence, was altered in the twelfth and the sixteenth centuries. The capitals of the columns, the two monuments of John XXI, and some frescoes and framed pictures are worthy of note. 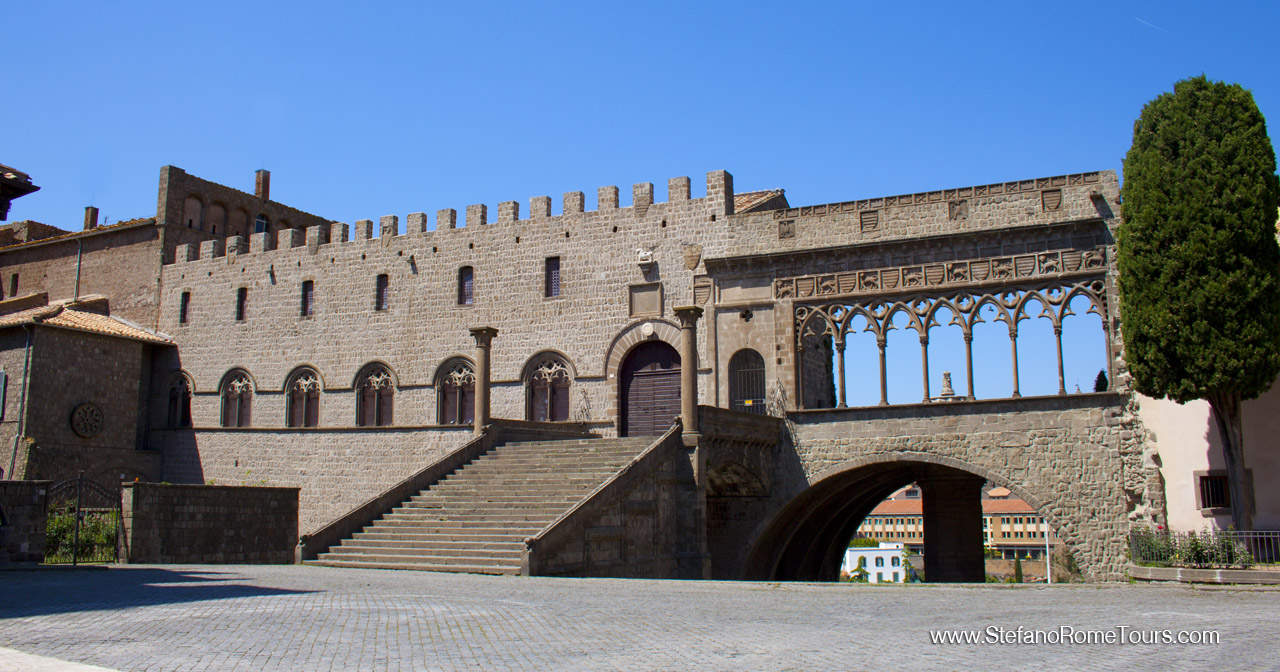 On the cathedral square stands the Episcopal Palace, decorated with fine sculpture of the thirteenth century. In total, five conclaves were held in this place: Urban IV (1261), Gregory X (1271, the longest lasting conclave of history: 2 years and 10 months), John XXI (1276, after the death of Cardinal Vicedomini, the pope of one day, before his consecration), Nicholas III (1277) and Martin V (1281).

Close by is the elegant Gothic façade of Santa Maria della Salute, in white and red marble where stunning sculptures can be viewed.

Piazza del Gesù  is a social and political center for Viterbo. Its main feature is the simple, 11th century Chiesa del Gesù, formerly known as the Church of San Silvestro.

It is known as the place where Prince Henry of Cornwall, son of King Richard I of England was stabbed to death by the sons of Simon de Montfort.

Some believe that it was actually Guy de Montfort himself who murdered the prince. There was much bitterness between the two families, mentioned by Dante in the XII Canto of the Inferno.

The elegant Renaissance fountain in the middle comes from the previously demolished Convent of San Domenico. At the entrance of the square is the Borgognone Tower (12th c.). 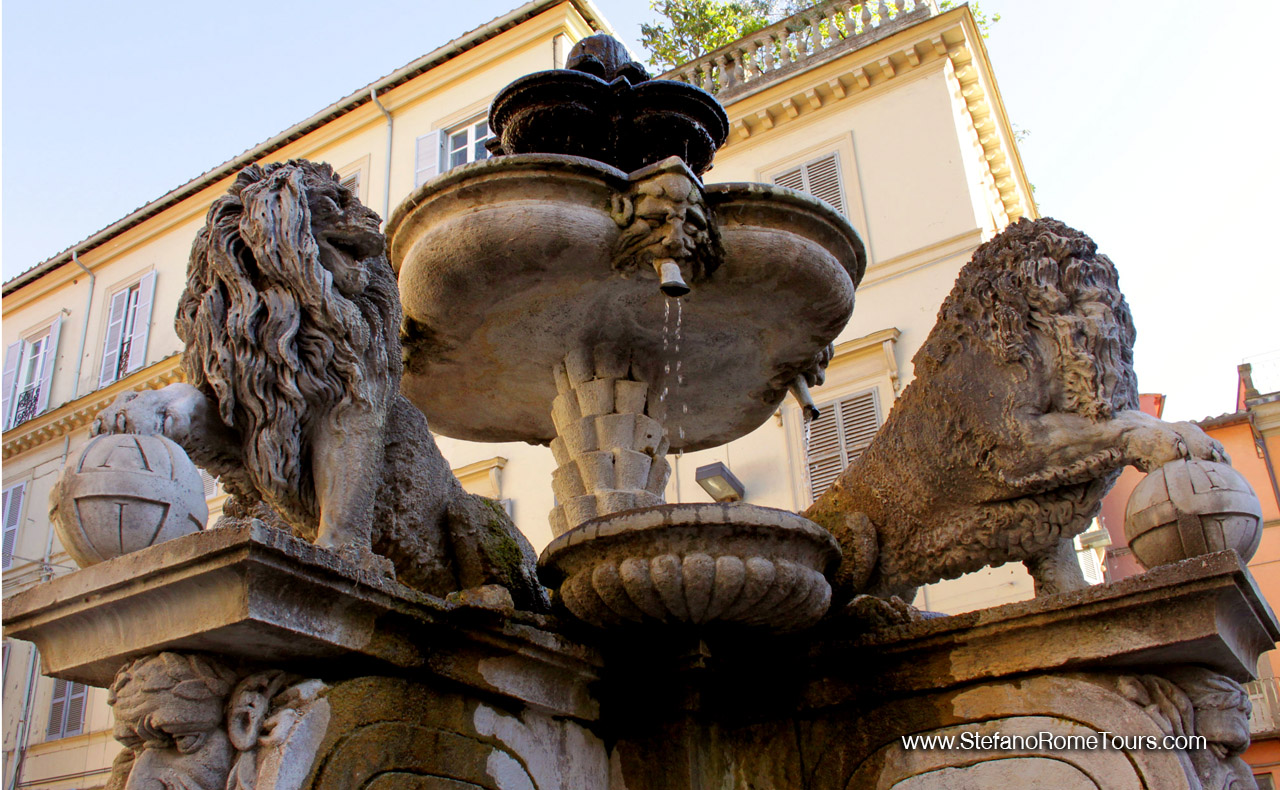 Fontana Grande (del Sapale) – the Grand Fountain - is one of the most ancient and beautiful fountains in the town. It has a Greek cross basin surrounded by a flight of stairs and in the middle, a column with two superimposed decreasing basins, which ends in a Gothic pinnacle.

Created by Bertoldo and Pietro di Giovanni in 1206, it was modified into its actual form in 1276, although subsequently renovated.

You will thoroughly enjoy this Viterbo, Calcata and Sutri tour from Rome. It is a tour rich in history, culture, beauty and countryside charm. It's a perfect respite from the chaos of busy cities like Rome.

We thank you for booking our Viterbo, Calcata and Sutri Tour, and for choosing Stefano Rome Tours for your guided tours in Rome and beyond, and we wish you safe and happy travels!

Guests who booked this Viterbo, Calcata and Sutri tour also enjoyed the following tours and benefited from our MULTIPLE TOUR DISCOUNT. Inquire within about our current Multiple Tour Special Offers.

Payment for this Viterbo, Calcata and Sutri Tour can be made in Euro funds at the end of your journey directly to your driver, or you may prepay in advance via PayPal or Credit Card online when you Confirm your Tour.

* This Viterbo, Calcata and Sutri Tour provides an English speaking Driver who is NOT a licensed tour guide.

MEETING POINT TO MEET YOUR DRIVER

For hotel pick ups, your driver will meet you inside your hotel lobby, or area permitted by your hotel.

* If your hotel / accommodation is situated on a street or in an area restricted to vehicle traffic, your driver will park the vehicle as close as lawfully possible, and will meet you on foot at your Address. From there, your driver will accompany you to your parked vehicle.  Door to Door service may not be possible on streets or areas restricted to traffic or vehicle stops.

Reviews from our Customers

We took Stefano's full-day tour of Calcata, Sutri, and Viterbo, what a wonderful day! Our driver Gian Luca was very skillful and a cheerful conversationalist. Calcata is a truly picturesque medieval town perched on a hilltop. Sutri has an ancient Roman colosseum and an early Christian cave church with still-visible frescoes, built over an even older pagan mithraeum, and Viterbo is a beautiful medieval/Rennaissance city where we visited the papal palace. We lunched in Viterbo at Three Kings, a charming restaurant that dates from the 1600s. When we mentioned we wanted gelato, Gian Luca led us to ...