World Renown Mosaic Studio in the Heart of The Vatican 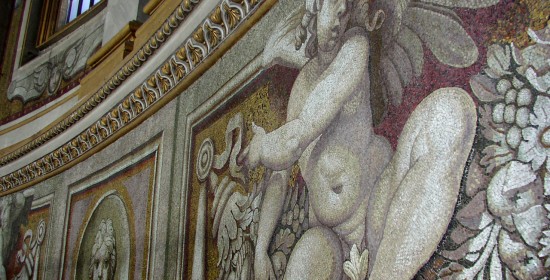 Hidden between two arches, in the shadow of the Sala delle Audienze of the Pope lies the small Studio of the Mosaic, one of the many treasures of the Vatican that is overlooked by most visitors. This studio contributes greatly to the art production and restoration of  the Vatican.

In the 16th century under Pope Gregory XIII, Venetian  mosaic craftsmen were called to Rome to teach the mosaic technique to the locals . By doing so they helped establish the first permanent team of Roman mosaic craftsmen.

Originally the mosaic studio was created to decorate parts of the Basilica such as the Gregorian Chapel and the Dome of Michelangelo, however the technique proved to be one of the most successful decorative styles and was extended to all the cupolas of the Basilica.

After two centuries of hard work, the Roman studio surpassed the Venetian production by creating over 26,000 color tonalities. In order to obtain a vast variety of shades, the craftsmen melted pre-existing colors together in a kiln built in the 1700’s inside the Vatican and that’s when the Studio became a permanent installation.

Around 1770 another revolutionary discovery reaffirmed the importance of the Studio worldwide. Two of the most prominent mosaic painters, Raffaelli and Aguatti, invented the “filate enamels”. This technique consists of re-melting the tiles, creating a malleable substance that can be stretched very thin to form minuscule pieces, sometimes smaller than 1 millimeter.

From that moment on, the mosaics produced in the Vatican were more beautiful and elegant than ever before. These small tiles could also be used to decorate jewelry and small everyday objects, setting off the commissions of the high aristocracy of Rome and the world to create one of a  kind gifts.

In fact to this day, the Studio of the Mosaics still executes works of any size on private commissions, many of which come from the United States.

The same exclusive group of artisans who work on commission from the pope also create unique mosaics  for the public which of course come with a hefty price tag.

Thank you for stopping by and reading our blog. We look forward to welcoming you to Rome!