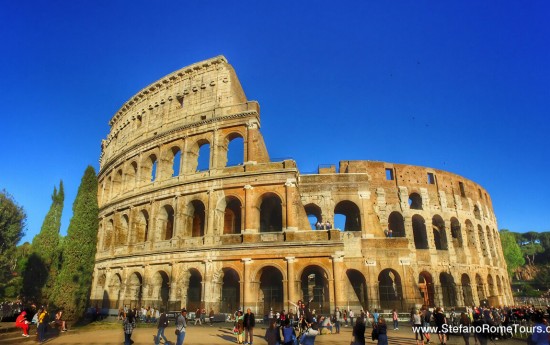 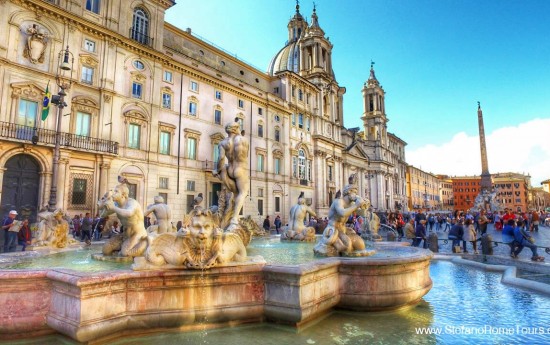 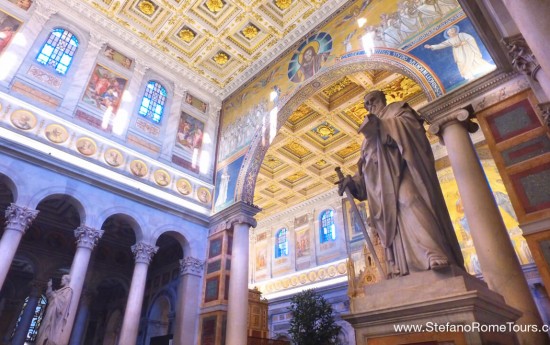 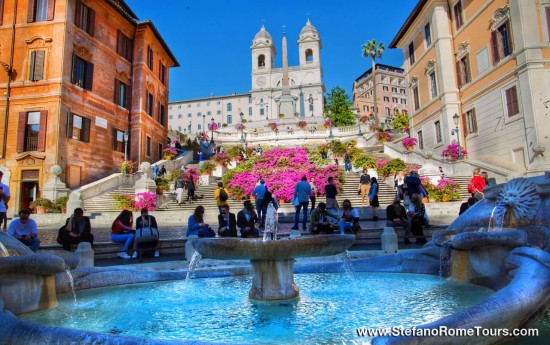 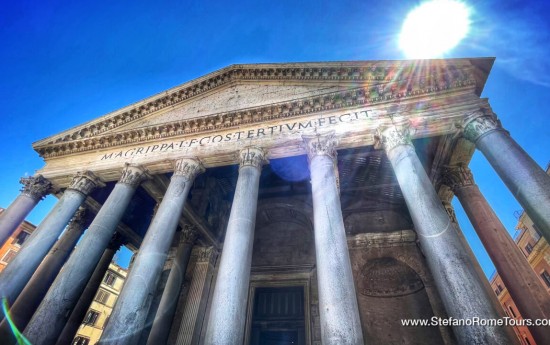 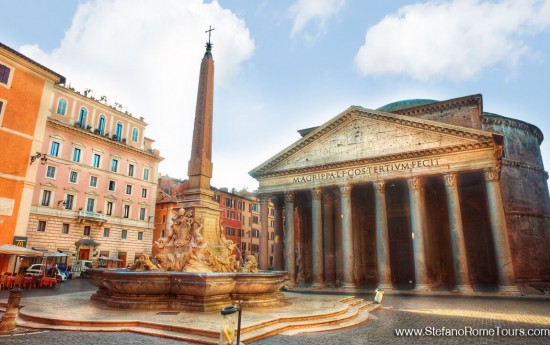 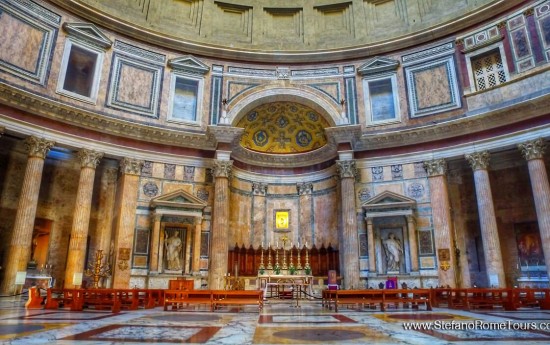 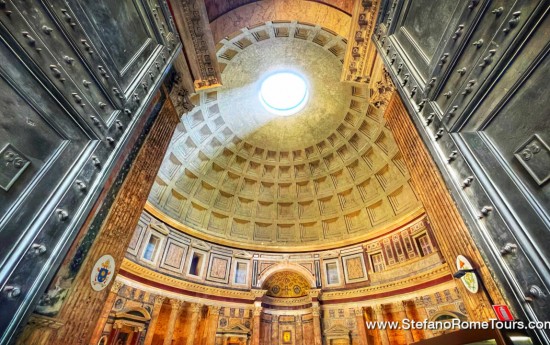 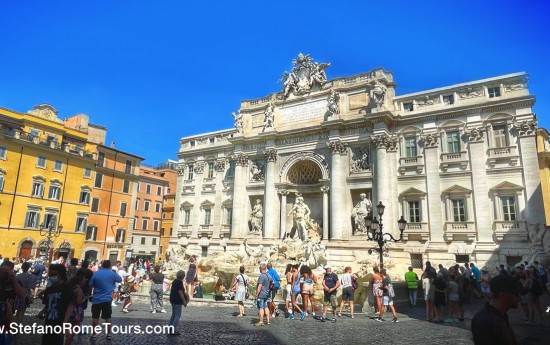 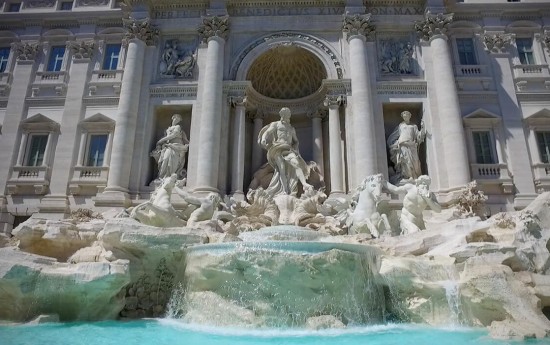 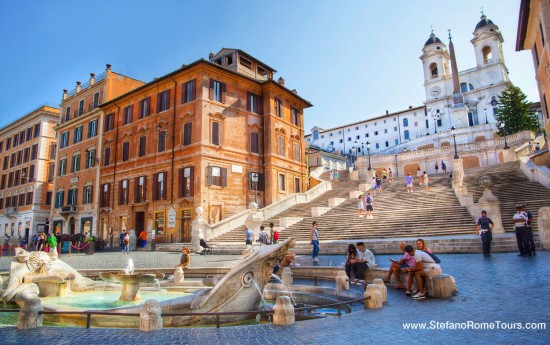 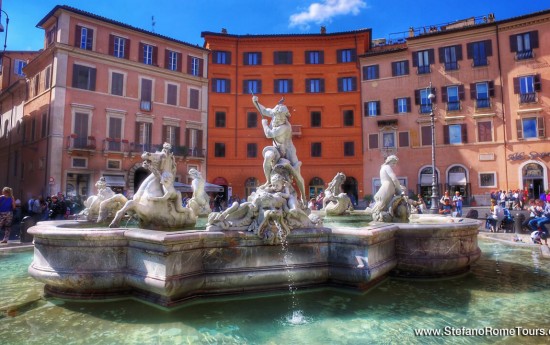 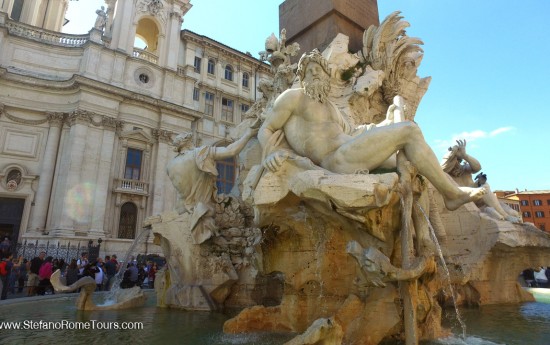 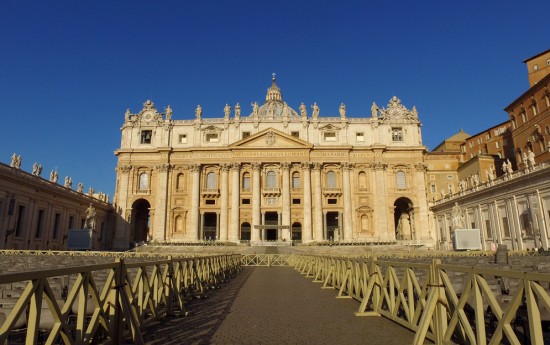 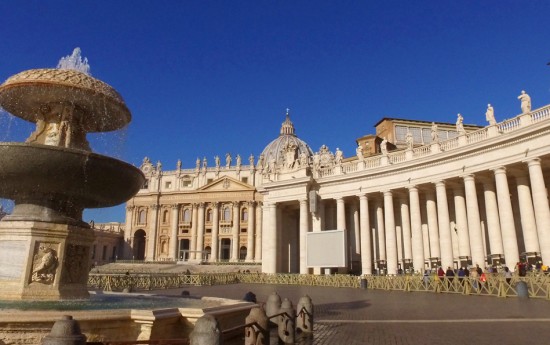 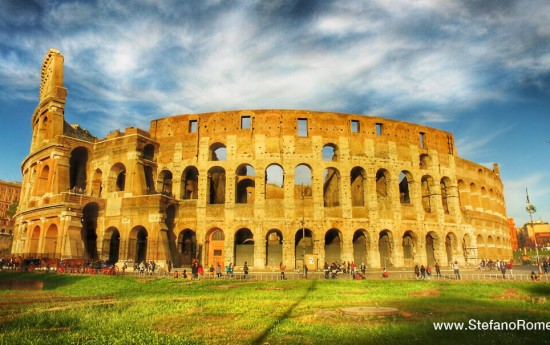 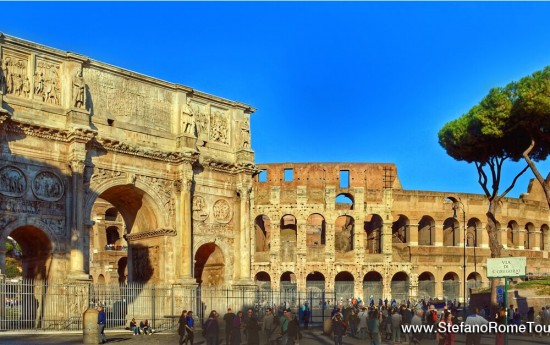 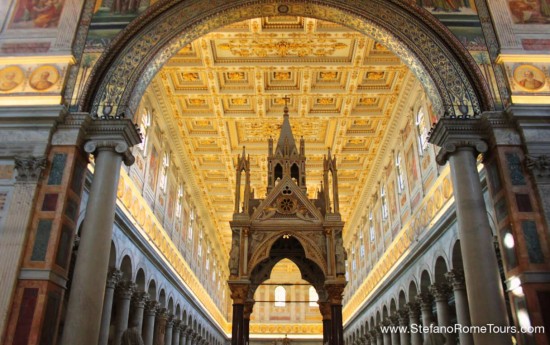 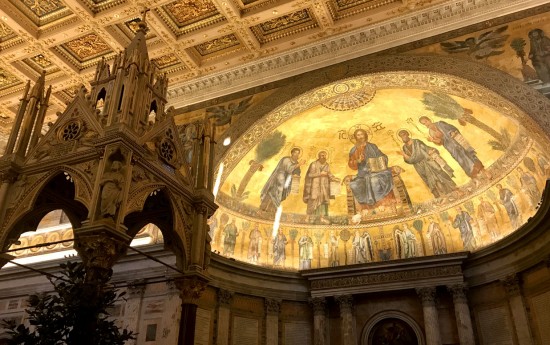 Our Post-Cruise Postcard Rome Tour from Civitavecchia is perfect for cruisers staying in Rome after their cruise ends in Civitavecchia and wishing to make the most of their debarkation day.

Your personal Stefano Rome Tours English-speaking Driver will pick you up on the Pier next to your ship, and take you on a fun-filled tour to experience Rome’s enthralling historic beauty and architecture while avoiding crowded tourist attractions, lengthy security lines, and advance admission tickets that restrict flexibility and sightseeing opportunities. At the conclusion of your Rome Tour, your driver will take you directly to your hotel in Rome for the most convenient and comfortable way to tour Rome from Civitavecchia post-cruise.

On our Post-Cruise Postcard Rome for Cruisers shore excursion, you will enjoy Rome’s most exciting squares, elaborate fountains, imposing Ancient Roman monuments, and one of Rome’s most remarkable churches.

** Dates on the Booking Form Calendar that are NOT Selectable, are NOT AVAILABLE. 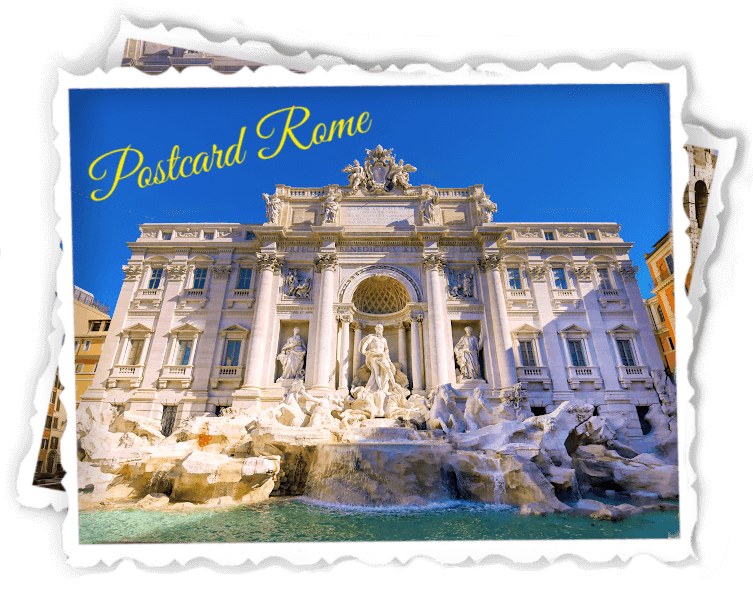 Enjoy a taste of La Dolce Vita as you visit some of Rome’s most iconic squares and fountains that have made their way into classic films and contemporary movies: Trevi Fountain, Spanish Steps, and Piazza Navona.

The moment you hear the soothing sounds of water gushing, you will know you are close to the Trevi Fountain, one of the most famous Baroque fountains in Rome and in the world! Dominated by marble carved pagan god Neptune riding a seashell chariot drawn by seahorses, Trevi Fountain is a symphony of water and sculptures. 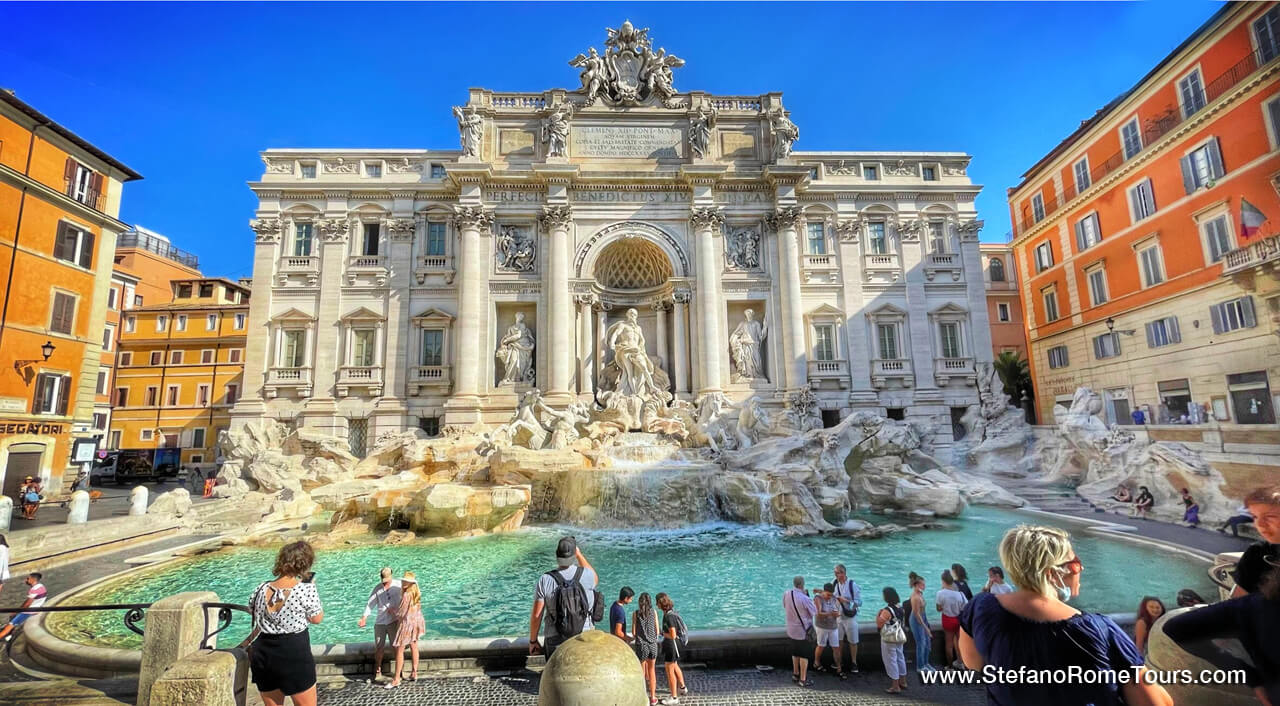 While at the Trevi Fountain, be sure to continue the long-enduring tradition of tossing a coin into the fountain to ensure a future visit to Rome. Aside from being one of the most well-recognized fountains in the world, the Trevi Fountain’s fame has been immortalized in classic films such as “Three Coins in A Fountain” and Federico Fellini’s “La Dolce Vita”.

The picturesque Spanish Steps with its elegant unfurling stairway connects the Church of Trinity and obelisk above with the square below dominated by the Fontana della Barcaccia (the Fountain of the Old Boat) below. 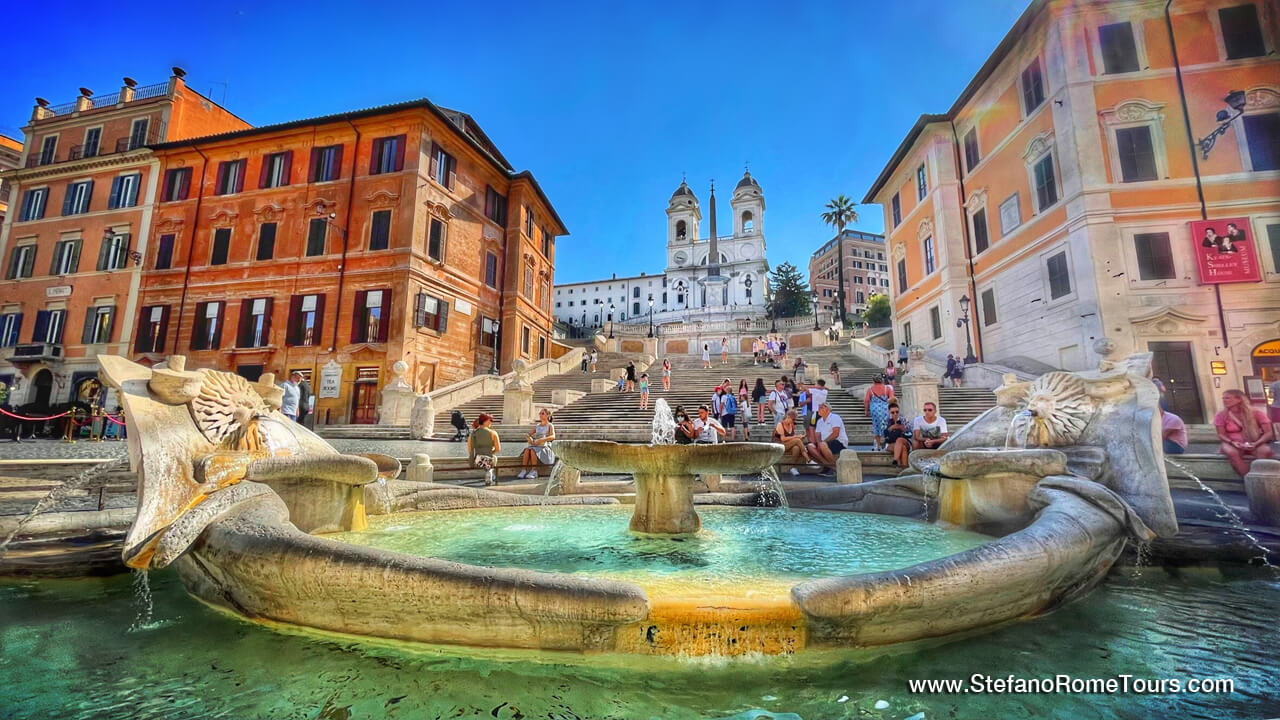 The beautiful palazzo to your right if you are facing the Spanish Steps is the Keats-Shelley Memorial House,  the famous English writer John Keats lived.

The lively Piazza Navona is adorned with three large fountains located in a spacious oblong square surrounded by warm-toned historic buildings.  A variety of colorful paintings and drawings exhibited by local artists adds to the charm and vibrant atmosphere of Piazza Navona.

Piazza Navona’s oval shape and name are from the Ancient Roman stadium upon which the square was built. The stadium was commissioned in the 1st century AD by Emperor Domitian to be used for athletic games and competitions. The name Navona derives from the ancient word for games “agone”.

The staggering fountain that dominates the square is the Fountain of Four Rivers (Fontana dei Quattro Fiumi) by Gian Lorenzo Bernini.  This 17th-century Baroque fountain represents the four major rivers of the four known continents of that time: Rio de la Plata (America), Danube (Europe), Ganges (Asia), and Nile (Africa). The fountain is surmounted by an ancient Egyptian obelisk commissioned by Pope Innocent X whose symbol crowns the obelisk.

Saint Peter’s Square is one of the most esteemed squares in Rome welcoming millions of visitors within the embrace of “the maternal arms of the Mother Church”.

The sweeping elliptical square was designed by Gian Lorenzo Bernini to define the square and to allow up to 300,000 faithful into the square when the Pope gives his blessings. The 284 colossal Doric columns are arranged in four rows. The colonnade is topped with 140 statues depicting various saints.

The 84-foot-tall ancient Egyptian obelisk marks the center of Saint Peter’s Square. Originally from Heliopolis, Egypt, the obelisk was brought to Rome in 37 AD by Emperor Caligula.

SEE THE WONDERS OF ANCIENT ROME

THE PANTHEON and PIAZZA DELLA ROTONDA

The magnificent Pantheon, located in Piazza della Rotonda, is one of Rome’s most famous ancient Roman temples. The square’s large central baroque fountain facing the Pantheon boasts a 20-foot ancient Egyptian obelisk originally that was originally commissioned by Pharaoh Ramses II for the Temple of Ra in Heliopolis, Egypt. 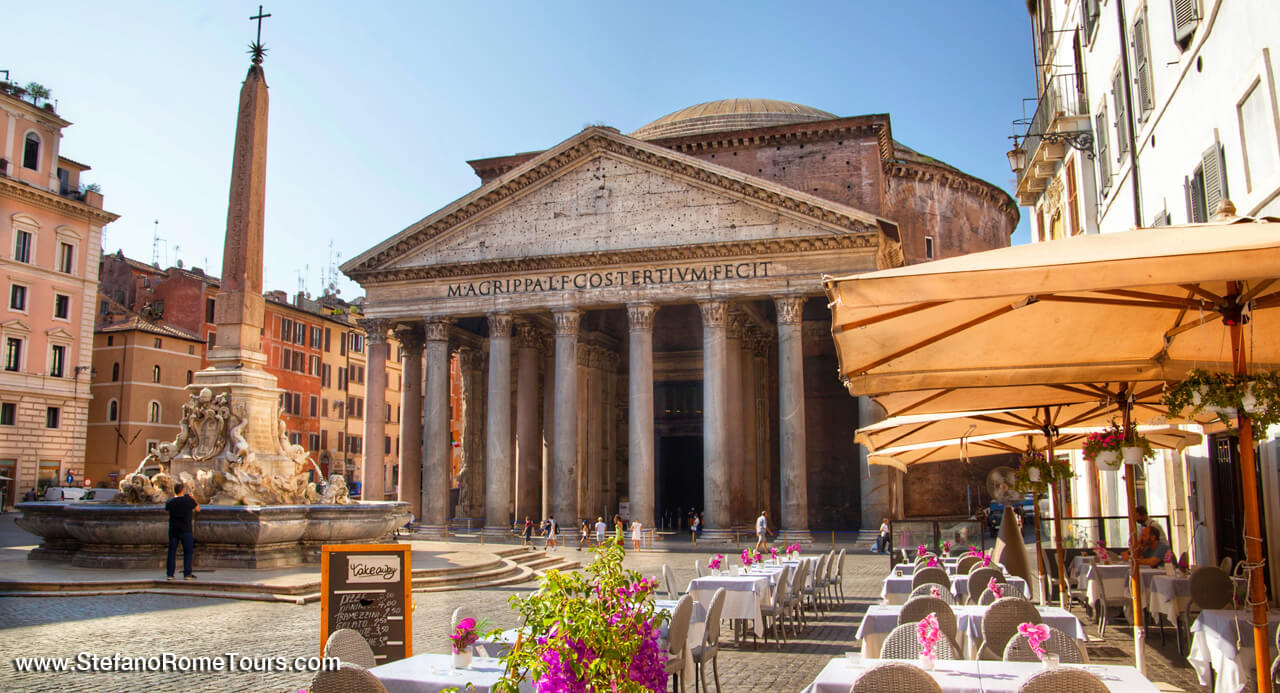 This  Pantheon is a remarkable 2nd-century AD ancient spherical Roman pagan temple dedicated to all gods. The Pantheon is not only one of the most inspirational architectural masterpieces of Ancient Rome with the world’s largest unreinforced dome, but it is also the longest ancient monument in continuous use.

In 609 AD, the ancient temple was converted into the Santa Maria dei Martiri church. Transforming the pagan temple into a Christian church helped preserve it while many ancient Roman monuments and buildings were stripped and quarried for construction materials during the Medieval and Renaissance eras. 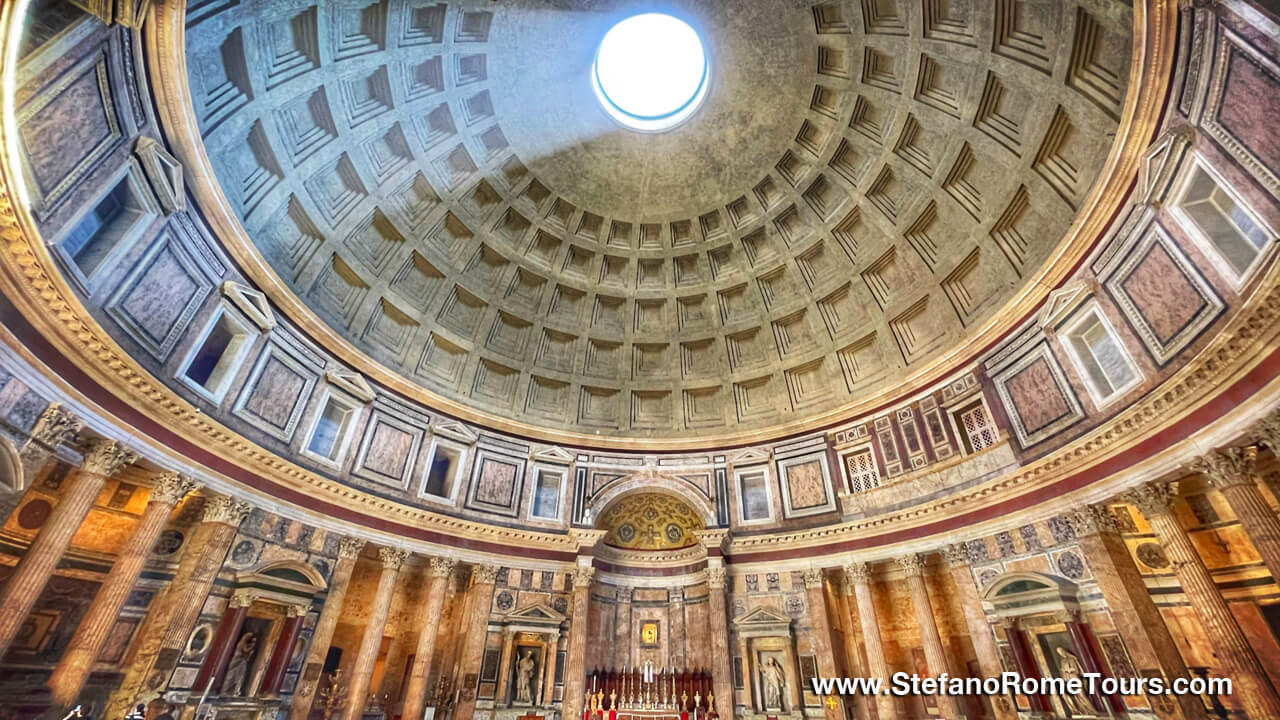 When you enter the Pantheon and look up you will see the large oculus  at the apex of the vast coffered dome that opens to the sky allowing light and rain to fall through.  Tombs of some of Italy’s most distinguished figures are inside the Pantheon, namely Italy’s King Vittorio Emanuele II, King Umberto and Queen Margherita, and Raphael - the famous Renaissance artist.

A special stop on a special terrace behind Capitoline Hill will surprise you with a breathtaking picture-perfect panorama of the Roman Forum from where the Roman Empire was governed and considered the Navel of the City of Rome (Umbilicus Urbis Romae). 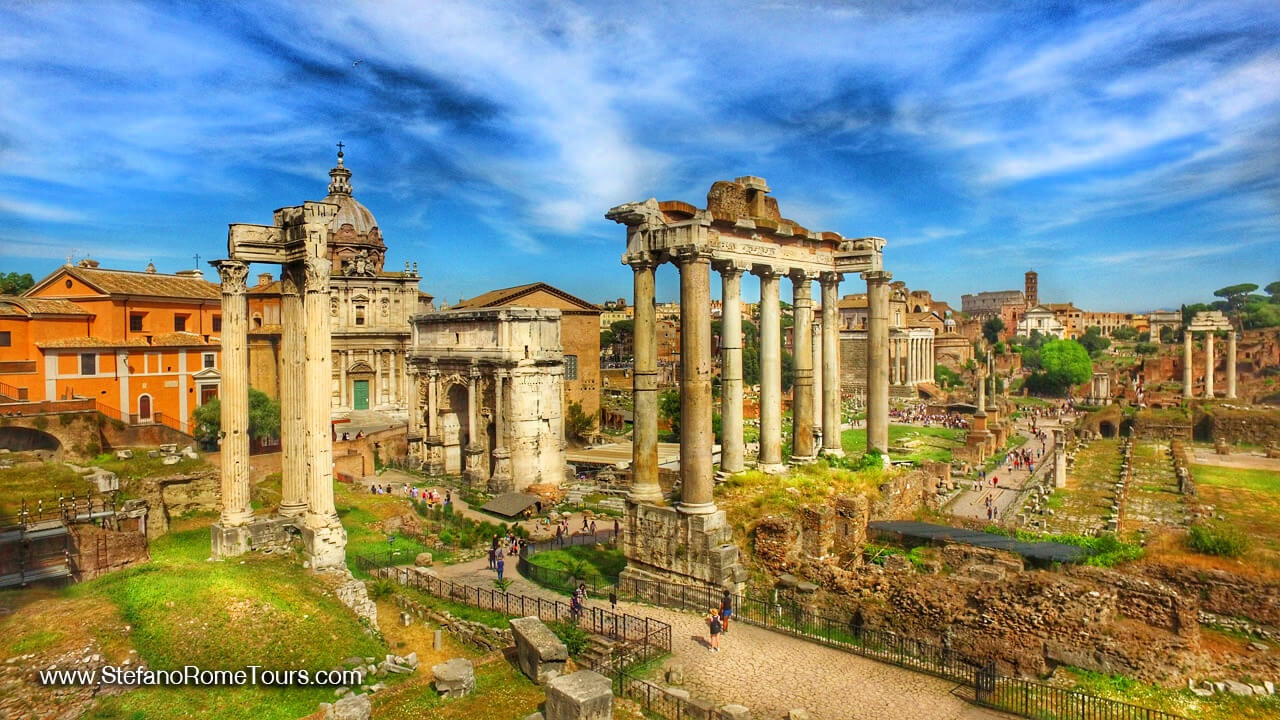 For many centuries the Roman Forum was the main gathering square for locals and Ancient Rome’s political,  judicial, commercial, and religious center. Impressive ruins of numerous structures and monuments are scattered around the Roman Forum. These magnificent buildings which originally glistened in fine white marble and were covered with terracotta roof tiles, now serve as vestiges of Ancient Rome’s glorious and powerful past.

To the right side is imperial Palatine Hill where emperors and the elite had their opulent palaces, and further back beyond the Roman Forum you can see the Colosseum peeking from the distance. Have your cameras ready as this picturesque spot is one of the most photographed locations in Rome!

Piazza del Colosseo is a spacious cobblestoned pedestrian square surrounded by Rome’s grand monuments: the Colosseum and the Arch of Constantine.

Behold the imposing iconic Colosseum, the world’s largest amphitheater ever built.  Named the Flavian Amphiether after Emperor Vespasian’s family name (Flavius) who commissioned its construction in 72 AD, the amphitheater was built to accommodate over 65,000 spectators gathering to watch the spectacles that took place in the arena: gladiatorial combats, animal hunts, mock sea battles, theater performances, and public executions.

Although over the millennia nature and human activity deteriorated the monument, the Colosseum is still one of the most formidable wonders of Ancient Rome and is visited by millions of people each year.

Near the Colosseum is the towering triumphal Arch of Emperor Constantine that commemorates his victory over Emperor Maxentius at the Battle of Milvian Bridge in 312 AD.

ST PAUL OUTSIDE THE WALLS - one of the four Papal Basilicas

Your Post-Cruise Postcard Rome Tour will continue with a visit to the awe-inspiring St Paul Outside the Walls, the second largest basilica in Rome and one of the four Papal Basilicas which are the highest-ranking churches in Christendom.

This basilica ranks among the top pilgrimage destinations for millions of Christians around the world.  Because the Basilica of St Paul Outside the Walls was built outside the ancient Roman Aurelian Walls,  it was also given the name “outside the walls” referencing its location. 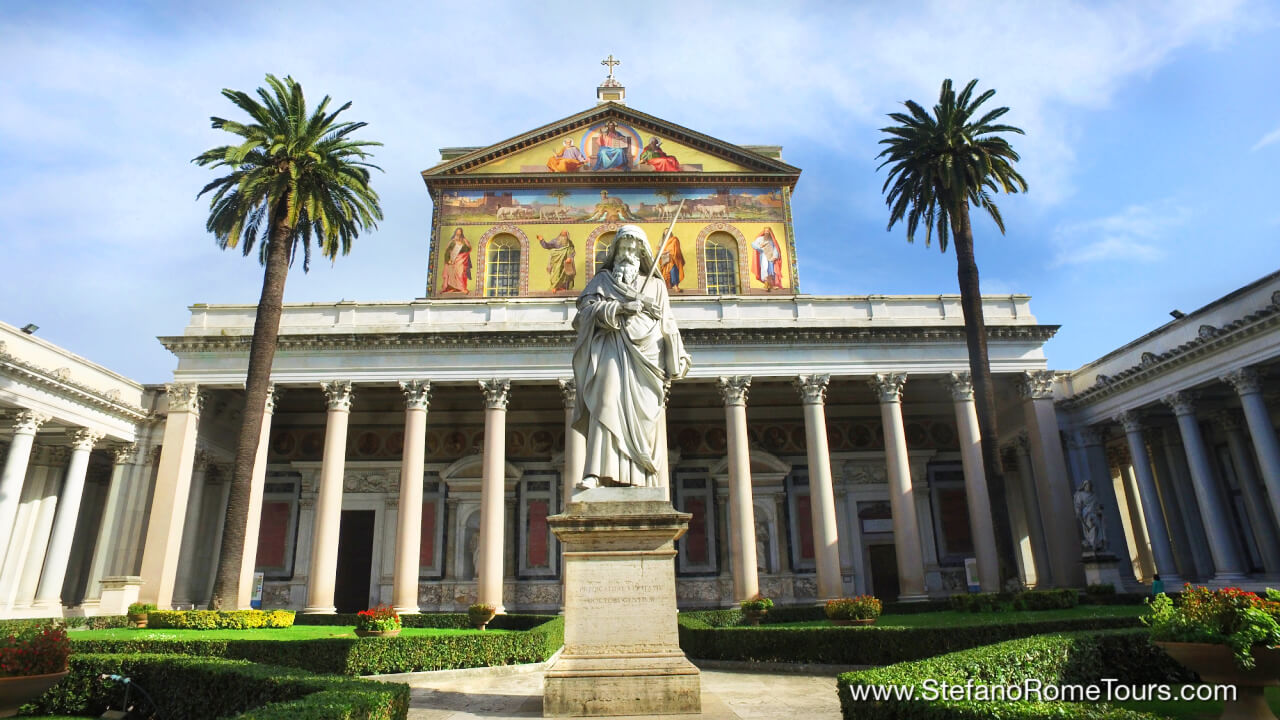 The Basilica was commissioned initially by Emperor Constantine in the 4th century to be built over the burial site of Saint Paul the Apostle. Paul's tomb is situated about 4.5 feet below the altar, placed beneath a marble tombstone inside the crypt.

In the early 1800s, the basilica was destroyed by fire, and thanks to the generosity of donors from around the world,  it was perfectly restored to its previous glory.

In addition to being an architectural masterpiece that rivals Rome’s major papal basilicas, St Paul Outside the Walls complex also features a graceful portico and a cloister of the monastery. This Basilica is more easily accessible to visitors than St Peter’s Basilica where security lines that form in St Peter’s square are unpredictably long and potentially exhausting.

This marks the end of your Rome postcard-perfect debarkation tour. From here you will join your driver who will take you to your hotel accommodation in Rome.

Thank you very much for booking our Post-Cruise Postcard Rome Tour from Civitavecchia and for choosing Stefano Rome Tours for your private shore excursions in Italy. We look forward to welcoming you to Rome!

Payment for this Postcard Rome tour can be made in Euro funds at the end of your journey directly to your driver, or you may prepay in advance via PayPal or Credit Card online when you Confirm your Tour.

We kindly ask that cancellations for Rome limo tours be made at least 7 days in advance so we can rebook your service and your reserved driver does not lose work for that day. We thank you for your cooperation and consideration.

Please allow up to 24 hours for email correspondence in response to email inquiries and tour reservation requests.

If you will be touring Rome on Saturday or Sunday, the Pantheon requires booking Time Slot Entrance Tickets in advance.  We will provide you with the links and a suitable time slot for your Pantheon Visit. Book them early as the time slots get booked up fast!

This Postcard Rome tour provides an English-speaking Driver who is NOT a Licensed Tour Guide.

* On this Post Cruise Panoramic Rome Tour from Civitavecchia you will SELF TOUR (unaccompanied by your driver) when away from the vehicle.

* You will be dropped off as close to the sites as possible in accordance with municipality and traffic laws.

For Shore Excursions from Civitavecchia, your driver will meet you on the Pier next to your Ship at your tour's scheduled pick-up time holding a sign with the NAME in your reservation.

Do NOT leave the ship area, and do NOT take a shuttle bus outside the port.

Look for your driver in the same area on the Pier as ALL private drivers will be waiting for their clients.  After you meet your driver you will be accompanied to your vehicle and your Rome private shore excursion will begin with a leisurely drive from Civitavecchia to Rome.