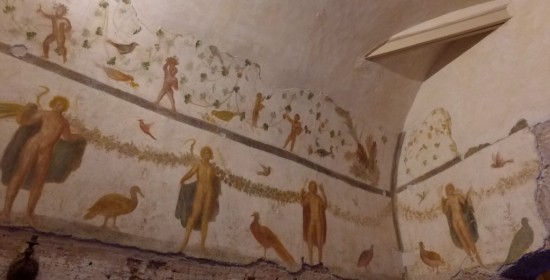 Case Romane del Celio (Roman Houses on Celio Hill) is one the places featured on our Postcard Rome Tour for Cruisers.  Most of you have never heard of this amazing hidden treasure in the heart of Rome.

We’d like to introduce you to a magnificent place that will take you on an underground  journey through Ancient Roman complex of residential and commercial buildings where people once lived and worked, and have left behind stunning architecture, frescoes, and mosaics.

Located below the Basilica of Saints John and Paul (Basilica di Santi Giovanni e Paolo) laid buried layers of ancient history that were not discovered until late 19th century.

Paul and John were 2 Roman Christian soldiers and brothers who were martyred late 4th century AD during the reign of Emperor Julian the Apostate and buried in their house on Celian hill. 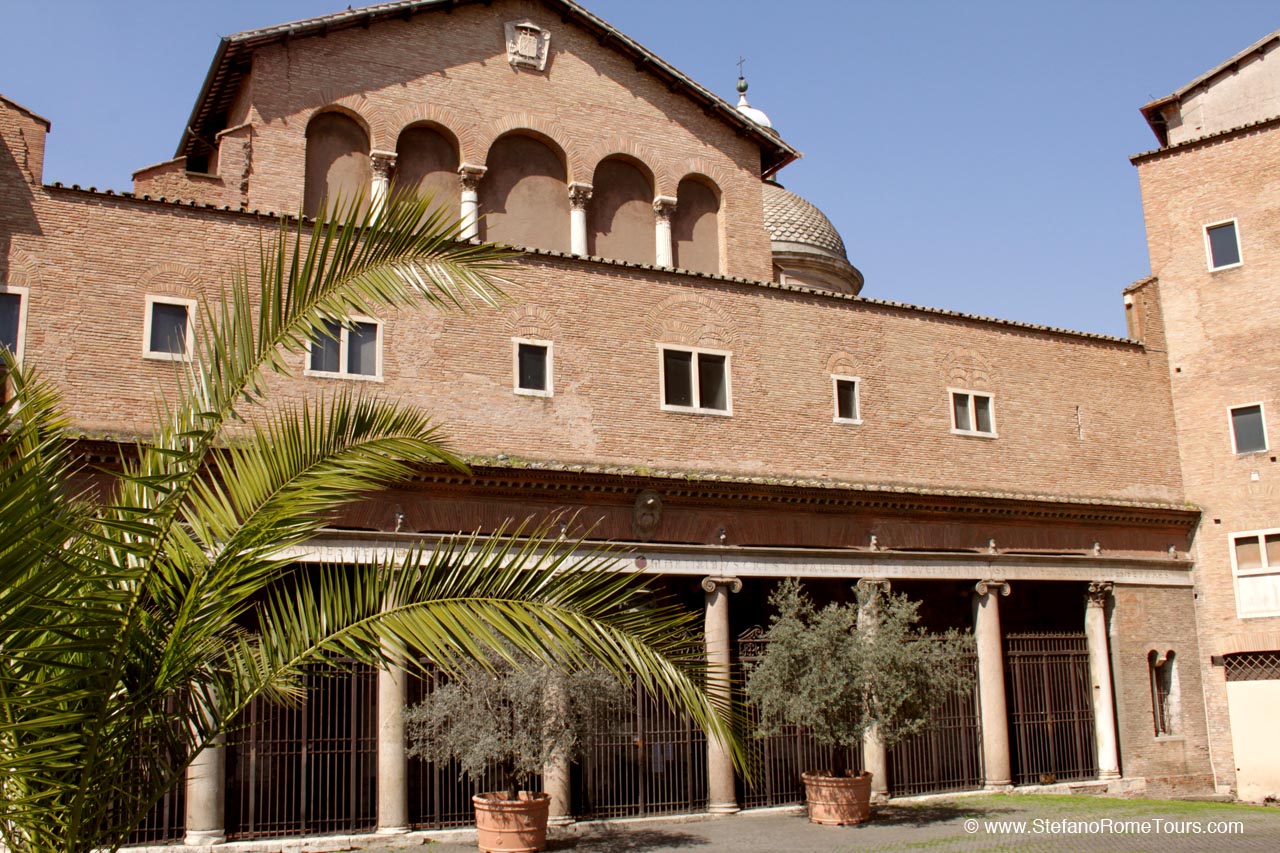 The Basilica above was initially built at the start of 5th century AD initiated by Senator Pammachius – a wealthy Roman and prominent Christian, and likely the last owner of the residential complex upon which the church was built.

Case Romane is accessible from a street named Clivus Scauri, one of the most significant ancient Roman roads on Celian Hill, and the entrance was once the portico of Roman shops that were once located here. 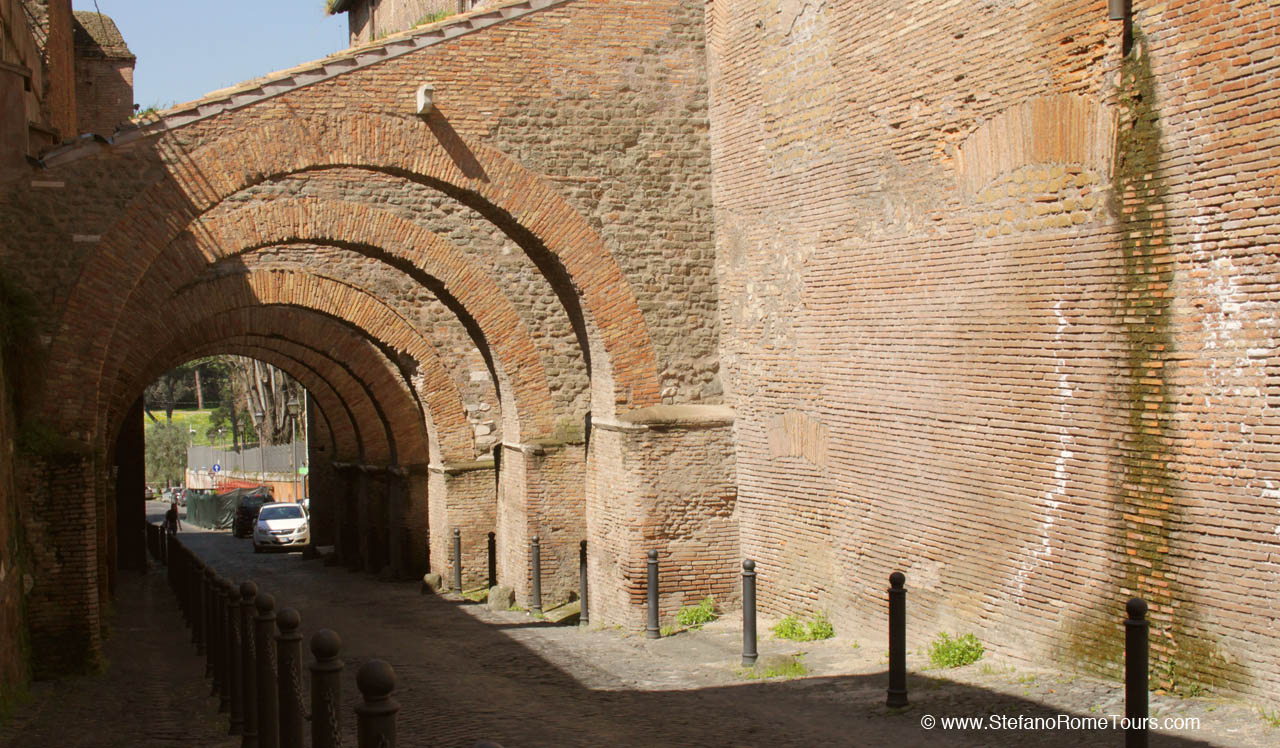 By 2nd century AD, this area was occupied by a luxurious 2 level residential building ( a “domus”)  running parallel Clivus Scauri. By 3rd century, an apartment building (an insula) was erected with shops on the ground floor and apartments on the upper floors for the less well off.

The apartments were accessed through the shops. In Ancient Rome, the upper floors were the least desirable as summers were very hot, winters very cold, no indoor plumbing that required going out to use public bath facilities, and the risks of fire from indoor cooking made it very dangerous if a lower level apartment caught fire and there was no escape for the upper levels dwellers. Often the shop owners lived on the floor above their ground level shops and further up the levels the cheaper the rent.

By the start of 4th century, a prominent wealthy figure purchased the domus and insula complex and integrated them into a large luxury residence.  If you go forward in time several decades, you’ll arrive at the time when the 2 brothers John and Paul lived here before they were martyred.

It was over this residence that the basilica was erected at the request of Senator Pammachius – possibly also the last owner of the residence.  Most of the Roman Houses were abandoned in order for the foundation of the church to be built on top, but some areas were still accessible over the centuries as indicated by a medieval oratory discovered there.

Now that you know the history of the Roman Houses, here are the splendid rooms and spaces not to be missed on your visit. As you  make your way through the labyrinth of rooms and alleys, imagine what life must have been like for the former inhabitants of these houses nearly 2,000 years ago.

ROOM OF THE GENIUSES 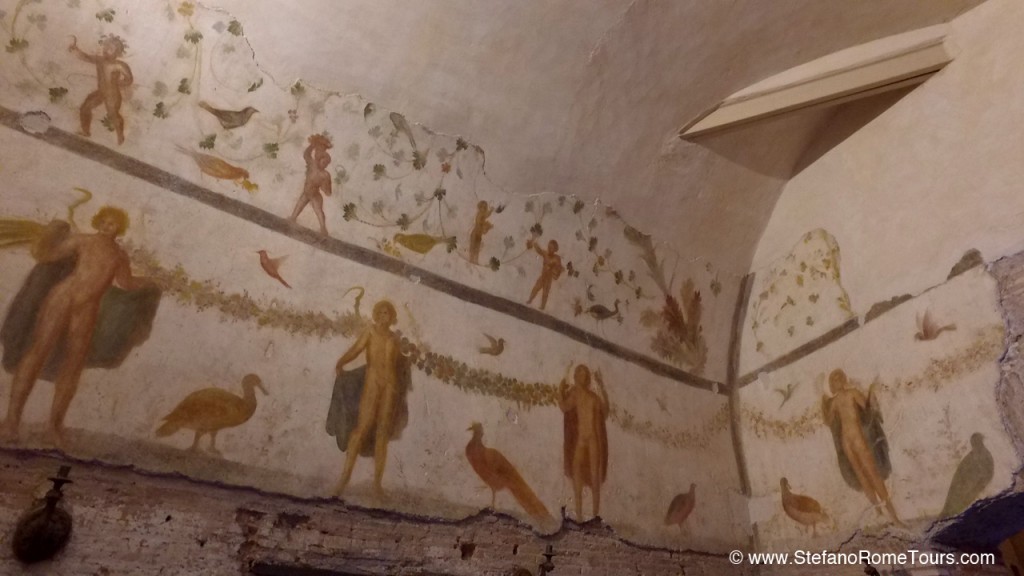 Upon visiting the Roman Houses you will enter into the Room of the Geniuses (or “geni” – Roman mythological divine spirits present in every living being and objects).  This space was originally a storage area transformed into an elegant space during the 3rd century.

The upper walls will instantly grab your attention  with two bands of beautiful paintings  of youthful winged nude figures (likely the geniuses), garlands of  flowers and fruit from the summer harvest.  In the band above grape vines meander among cupids and exotic birds.

ROOM OF THE FAUX MARBLE 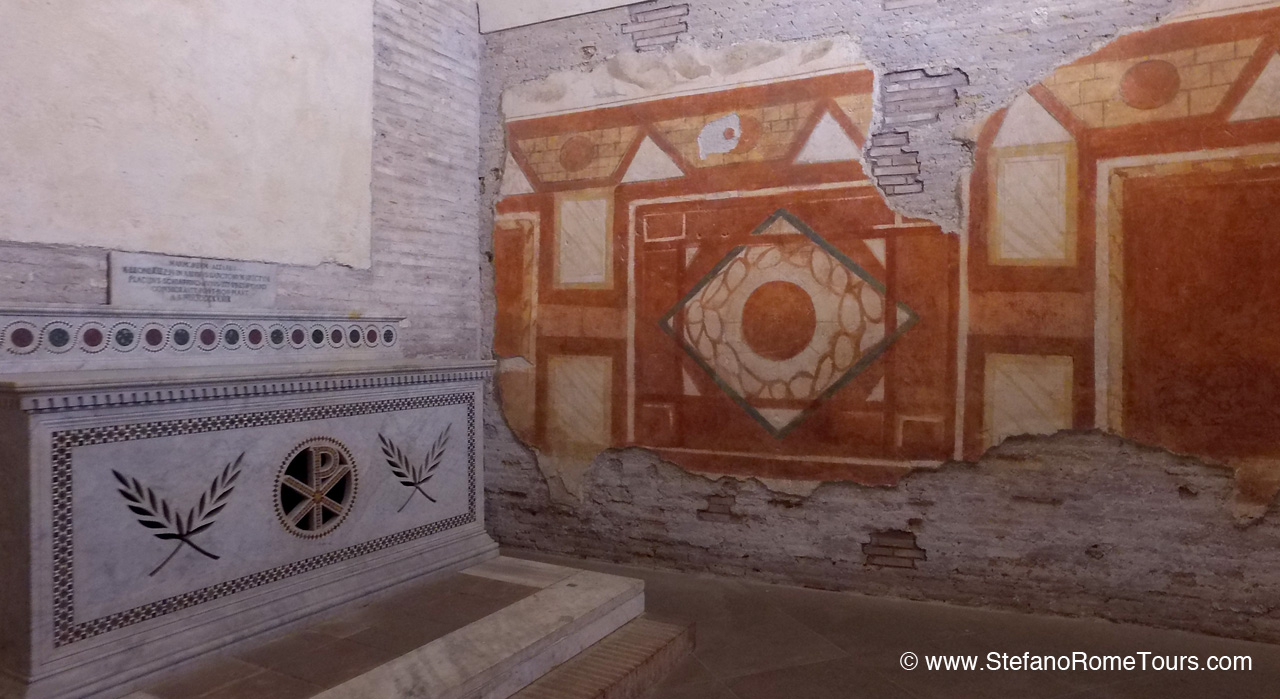 From here, you will enter the Room of the Faux Marble.  Marble was precious in the ancient times as it is today, and decorative marble inlaid into walls to create patterns of images (opus sectile) was sometimes imitated with paint.

Altars and and Christian inscriptions found here indicates that religious activities occurred in these rooms even as recent as  late 19th century.

ROOM OF THE ORANT 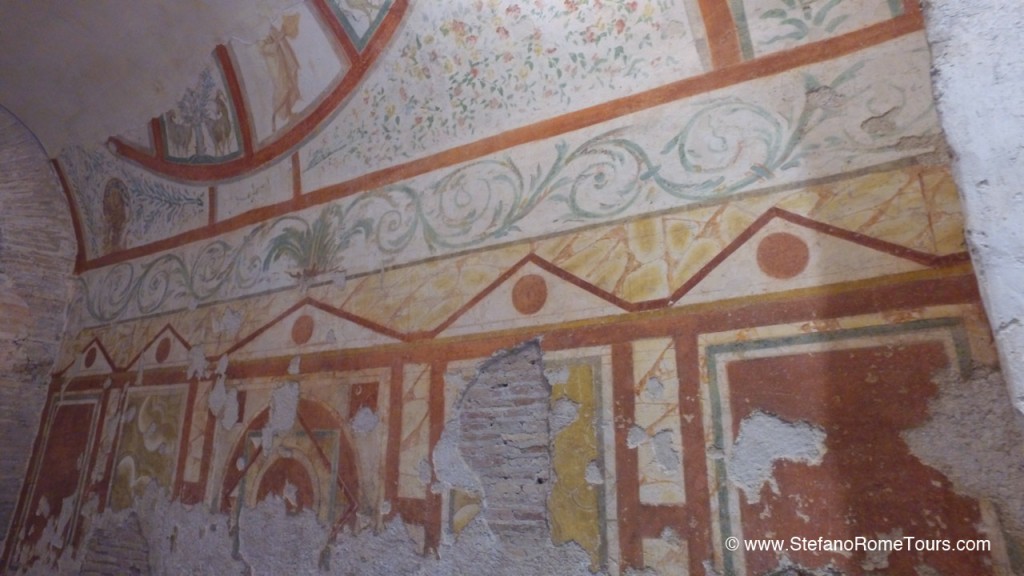 Perhaps the most ornate room is the vaulted Room of the Orant (Worshipper) based on the subject painted on the wall. The walls were painted during the 4th century, with figures of philosophers, mask of Slienius, a female theater mask, fantasy monsters, sheep and goats, 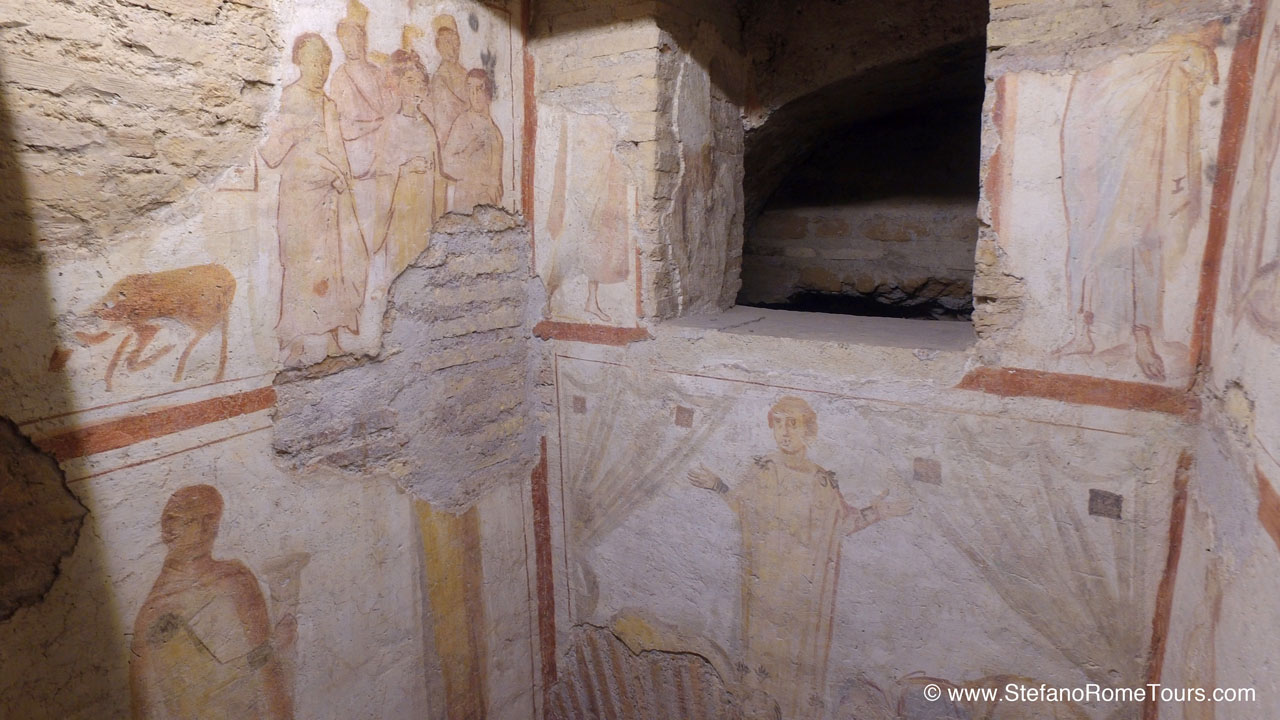 By mid 4th century, a small chapel (a confessio) within an alcove was assembled where visiting pilgrims were able pray before the painted Christian scenes.

THE NYMPHAEUM OF PROSERPINA 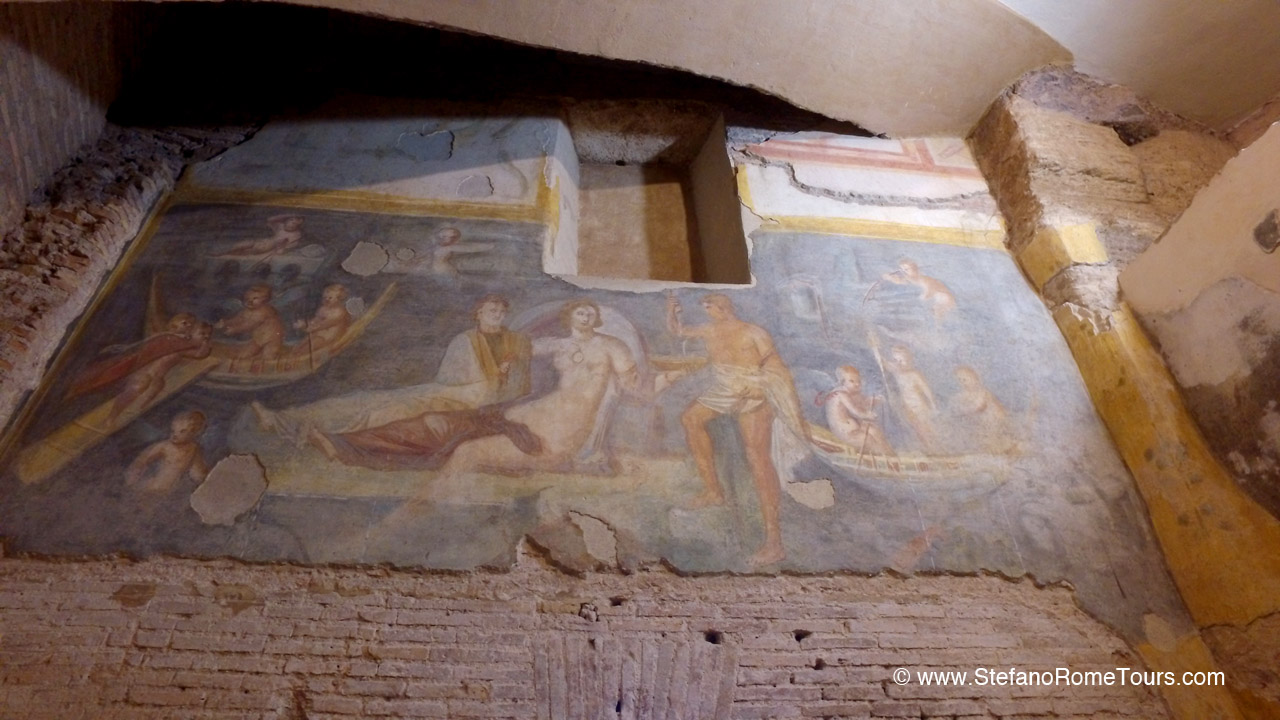 The Nymphaeum of Proserpina was originally an interior open air courtyard that separated the residential buildings from the commercial ones. Niches, fountains, frescoes and mosaics are well preserved and quite remarkable.

The large late 3rd century AD fresco on the upper part of the wall depicts mythological scenes taking place at sea: nude cupids fishing or sailing, a large barge in the center with 2 reclining female figures – one draped in cloaks and one semi nude, a nearby male figure pouring the ladies a drink.

Interpretations of this scenes vary with one version calling the reclining semi nude female Venus, the Roman mythological goddess who was born from sea foam and often depicted on a half shell at sea. The other version interprets the female as Proserpina – the Roman goddess associated  with the underworld, joined by her mother Ceres and Bacchus (the wine god).

If you look down you will notice the original floor made of multi colored marble pieces.

In an adjacent alcove, you can admire the black and white tile floor with geometrical and floral motifs.

Last but not least is the Antiquarium – the museum where the ancient Roman and medieval artifacts excavated on this site are on display.

Located right below the Chapel of Saint Paul of the Cross, the museum is in the shape of a Greek cross.

Here you will find a myriad of objects excavated between 1887  and 1936: ancient 1st -7th century AD amphorae (elongated terracotta jugs used to transport liquid and dry products), tableware, sewing needles and thread spools, oil lamps, sculptures, and among other precious items a large 12th century fresco of Christ between saints John and Paul.

This marks the end of your visit through time and through the ancient Roman Houses.

Be sure to also visit the Basilica of Saints John and Paul, it has a magnificent interior reminiscent of a early 20th century ballroom with its chandeliers. No wonder it’s a popular church of wedding events.

For more information on our POSTCARD ROME TOUR FOR CRUISERS that includes a visit to the Roman Houses, please visit our main tour website.

Thank you very much for reading our blog, and for choosing Stefano Rome Tours for your Day Tours and Shore Excursions in Italy.